As new recruits poured into Frederick in the late summer and fall of 1861 Camp Frederick would became home to the 1st PHB Infantry and much of the Home Brigade cavalry. Located on the high ground to the south of Frederick, the site had a long history that predated the Civil War by nearly a century. Two stone barracks buildings stood on the hilltop, both of which were completed in the 1780s. During the American Revolution German prisoners were housed within the long, L-shaped structures, which gave the site the name it still carries to this day – the “Hessian Barracks.” 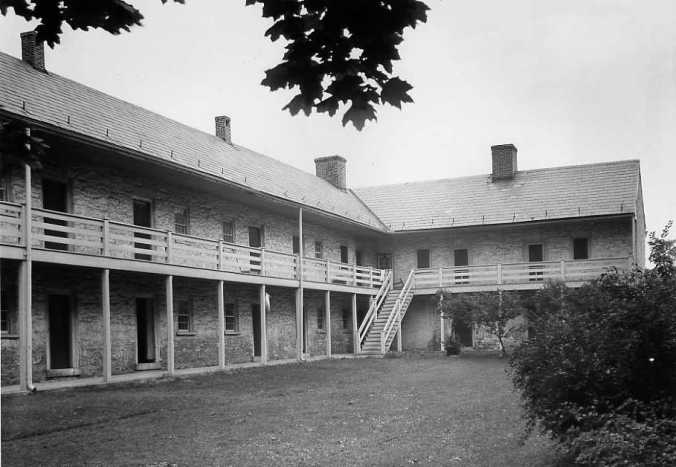 Frederick’s “Hessian Barracks” in the 1970s (Library of Congress)

By 1861 the barracks buildings had seen a variety of uses, having housed prisoners during the War of 1812, a state armory, and the agricultural fairgrounds. With the coming of the Civil War the barracks were again occupied by soldiers – this time not prisoners, but raw recruits for the Home Brigade. 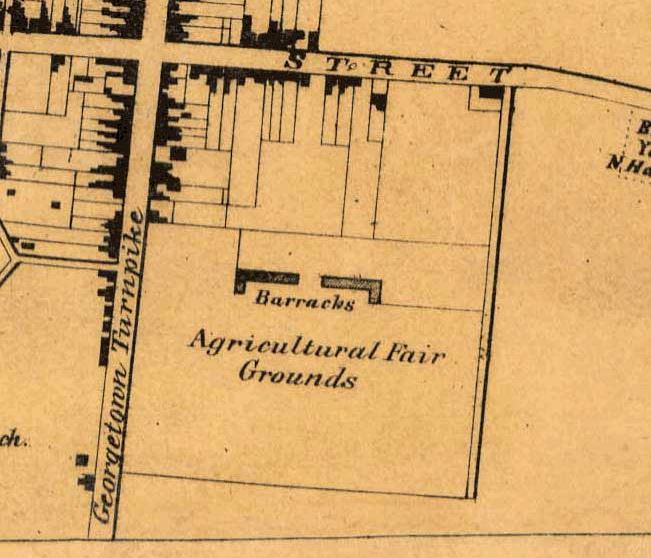 The location of “Camp Frederick” on Isaac Bond’s Map of Frederick County, 1858 (Library of Congress)

In August the old barracks were chosen to serve as a military depot and hospital by Quartermaster General George Crossman (1). As the companies of the 1st PHB Infantry arrived in Frederick they were sent to the barracks, now dubbed “Camp Frederick.”

In September 1861  an elaborate ceremony recalling Maryland’s patriotic past was conducted at Camp Frederick. The soldiers of Home Brigade invited the “United Brothers of the War of 1812” to their camp to commemorate the decisive victory of the Maryland militia over the British at the Battle of North Point in 1814. Together the old veterans and new recruits marched through the town. After the parade the “Union Defenders” – Captain Glessner’s Company B, 1st PHB Infantry- were presented a stand of colors by William L. W. Seabrook, state Commissioner of the Land Office and noted unionist (2).

That very same week the Republican Citizen, one of Frederick’s leading Democratic papers, had some less than flattering things to say about the men of the Home Brigade at Camp Frederick:

An Outrage if True – We regret to see it stated in one of the Black Republican papers of this city, that some of the members of the Home Brigade now being raised, and quartered at the Barracks, insulted and treated with great indignity, several of the most quiet, and respectable citizens of the county, who visited the public grounds, at that place, a few days ago. This is much to be regretted, if true, and can only impress the people with the conviction that the Home Brigade, instead of answering the objects for which it purports to be organized, that of protecting the lives and property of the people, is likely to become a scourge of the community. (3)

That the Citizen took such a negative stance on the Home Brigade is no surprise. Politically it was diametrically opposed to Francis Thomas and the Home Brigade, and often advocated for the “Peace Party” and secessionists in western Maryland.

As September gave way to October more companies arrived at Camp Frederick and more colors were presented to the troops. The ladies of Emmitsburg presented Captain Horner’s Company (Co. C) of cavalry with a stand of colors on October 2nd. Emmitsburg physician Dr. Robert L. Annan gave a speech, and the colors were received by Lt. Francis Gallagher (4). Two of Dr. Robert’s brothers were enlisted in the Company – Lt. John Annan and Sergeant Andrew Annan.

It was during this time at Camp Frederick that the regiments of the Home Brigade would start taking some of their first casualties – not from combat but from disease. One of the most prominent men to fall during this time was Captain Samuel Prather, commander of Company F, 1st PHB Infantry. The Captain fell ill with typhoid fever at the beginning of October and was taken to the hospital established at the Female Seminary in Frederick, located on Church Street. 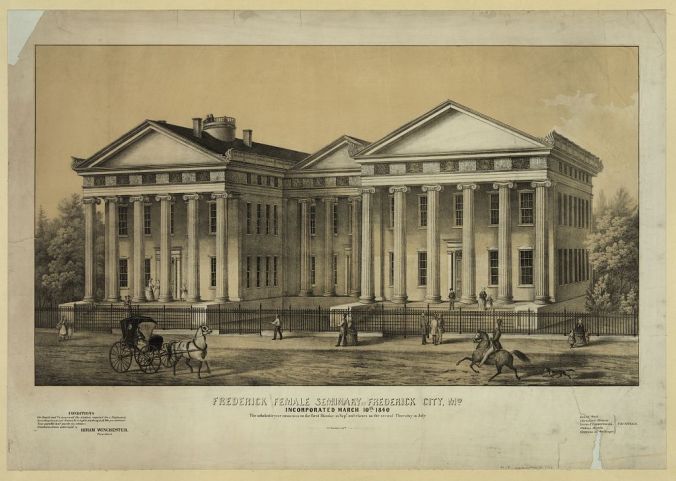 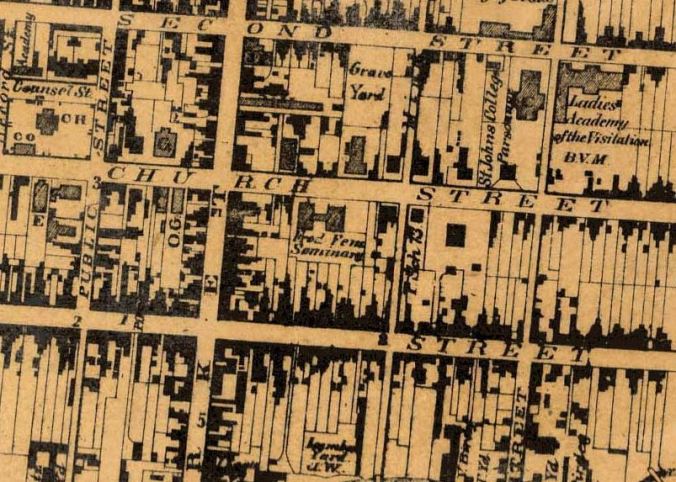 The location of the Seminary on Church Street, just east of Market St. (Library of Congress)

Prather’s illness took a turn for the worse, and on October 14th he succumbed to his disease. The men of his company escorted his remains back to his hometown of Clear Spring (home of so many other notables in the Brigade), where he was interred at Rose Hill Cemetery on the east side of town. The Republican Citizen used Prather’s death to criticize the Union war effort, referring to the young Captain as “Another victim of this fratricidal strife, his disease having been contracted in camp, and it is much to be regretted that his life had not been sacrificed in a better cause” (5).

Prather’s comrades would remember their fallen leader and his cause much more fondly, and would commission a monument in his honor that stands over his grave today. 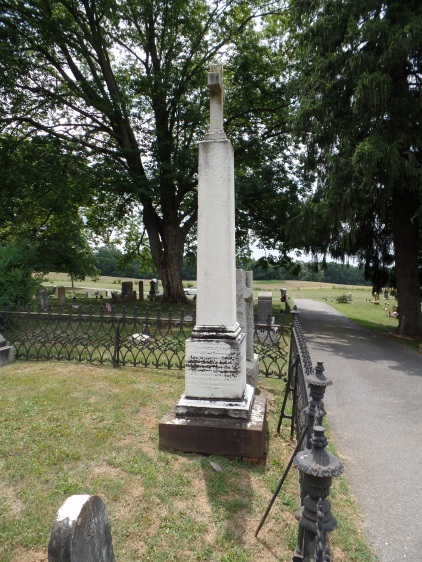 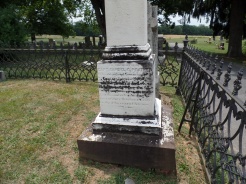 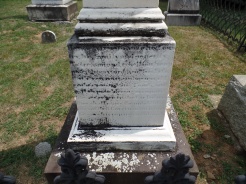 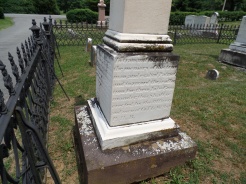 The inscription on the monument commends Prather as a “true man and exalted Patriot” who gave his life for his country in “the Great Rebellion of 1861 against the only Free Government on the Earth.”

Around the time that Prather lay dying in the hospital at the seminary the decision was made to move most of the Home Brigade out of Camp Frederick to new camps north of town. Whether this decision was made due to the prevalence of disease, as in the the case of Captain Prather, or because of the harassment of locals as reported in the Citizen is not clear. One reason cited for the move was to lessen the noise bothering patients at the hospital that was filling up at the Barracks. Whatever the true reason the 1st PHB Infantry relocated to a camp two miles north of the city on the property of Lt. Col. G. R. Dennis (6). 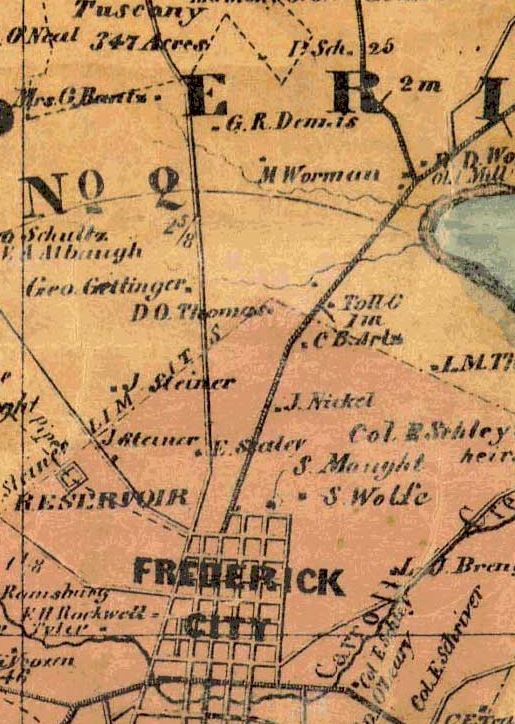 Dennis’s property north of Frederick, as seen on the Bond Map.This area has been disrupted significantly by modern construction and the widening of US Rt. 15 (Library of Congress)

The G. R. Dennis in question was George Robertson Dennis, the Lieutenant Colonel of the 1st Potomac Home Brigade Infantry. 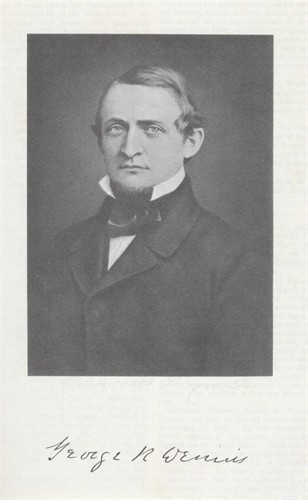 Dennis was a native of Somerset County, on Maryland’s Eastern Shore, who had come to Frederick County as a young man. By 1860 he had become one of the wealthier planters in the region, as well as the owner of at least 26 enslaved people (7). Dennis would serve with the Home Brigade through September of 1862, when he resigned; soon afterward he would take a position as director of the Baltimore and Ohio Railroad.

While the infantry moved to their new camp at Lt. Col. Dennis’ property, it appears that some of the cavalry remained at the Barracks. This is evidenced by a tragic accident that occurred at the Barracks -now rechristened “Camp Thomas”- in November of 1861. Lt. Annan (whose brother had presented the regimental colors back in October) was talking to a Private Mehring while the latter was cleaning his Sharp’s carbine in camp. The carbine accidentally discharged, the round “entering [Annan’s] cheek below the eye and [passing] through his head,” mortally wounding the 19 year old Lieutenant (8). His body was escorted home to Emmitsburg by the men of his company, and poor Private Mehring’s “anguish at the casualty was pitiable in the extreme.” No private in Company C bears the name Mehring on the muster rolls, but a Private Edwin Merring does show up. The 22 year old school teacher from Carroll County, Md seems like the most likely suspect in the death. Merring survived the war and moved to Kansas after the conflict. He remained active in the local G.A.R. Post until his death in 1905.

Prather and Annan’s deaths, while tragic, weren’t the only deaths as the winter of 1861-1862 moved on. We’ll take a closer at how disease and accidents took their toll on the Home Brigade next time, but before we go a few notes on visiting some of the sites mentioned in today’s entry.

The former site of Camp Frederick is located on the campus of the Maryland School for the Deaf at South Market Street and Clarke Place in downtown Frederick. Although the west building has been demolished, the east barracks building is still standing and in good shape. The school is off limits to visitors except by appointment or on select days. If you are not able to visit when the Barracks are open you can get an ok view of the east building from the sidewalk on South Carroll Street. A great option for visiting the Barracks is to go during the Frederick County Museums by Candlelight event in December. Not only is it a fun holiday event, but museums across the County are free for the event. Keep an eye on Visit Frederick for the exact date.

The former site of the Female Seminary is located on East Church Street, immediately across from Frederick’s beautiful and historic Evangelical Lutheran Church and next to the Frederick County Historical Society. As I mentioned above the building now houses County government offices, so unless you have business there it’s not a place you’re likely to visit. The building is plainly visible from the street, however. For information on the hospital that was located at the Seminary during the war (as well as the other hospitals in Frederick) a visit to the National Museum of Civil War Medicine is an absolute must visit for any history buffs visiting Frederick. Side note – the Female Seminary that was once housed there became Hood Collage after the War.