It’s been a while since I’ve updated, but rest assured I’ve been busy! Between researching my “new” project and continuing Potomac Home Brigade research I’ve had plenty on my plate. I am also preparing for a number of public talks this year, so if you’re interested in the Home Brigade or the Upper Potomac during the war I hope you can come out and join us. I’ll post the details soon. Anyways, on with today’s story…

Most Civil War aficionados are familiar with the story of John Burns and the Battle of Gettysburg. When the rebel army crossed into Pennsylvania in the summer of 1863 the elderly War of 1812 veteran took up his musket and marched off to take his place alongside the soldiers of the 1st Corps. The feisty sexagenarian was wounded several times and narrowly escaped capture. The story of the senior soldier who took up arms spread like wildfire through the north, and Burns quickly became something of a celebrity.

Burns and his flintlock after the Battle of Gettysburg

A memorial statue to Burns stands on McPherson’s Ridge, and a more lighthearted tribute exists in the form of this t-shirt.

Frederick County has it’s own homegrown version of John Burns. He never achieved the same level of recognition as his Pennsylvania compatriot, but the story of George Blessing is a fascinating one. It’s about time that the so called Hero of Highland got his due.

George Blessing was born around 1794 and lived in the western part of Frederick County, not far from the village of Myersville. He was a well off farmer, with the 1850 census showing his property valued at $6500.

It was on his farm that the drama that made him a local celebrity played out. Let’s go back to the summer of 1864. Jubal Early’s Rebel army has crossed the Potomac and is marching eastward to threaten Washington and Baltimore. Unlike earlier Confederate incursions, where southern authorities hoped to court public opinion in Maryland, Jubal Early had no illusions about Marylanders coming out in large numbers to support the Confederate cause. He ransomed towns and cities across Western Maryland and his troops “requisitioned” everything that they could carry, partially in an effort to inflict the sort of “hard war” that had been wreaked on Virginia for the past several years.

On the 9th of July – the same day that the Battle of Monocacy raged just 12 miles to the southeast – on of these Confederate foraging parties rode up to the Blessing Farm in search of horses. The party was made up of men from the 47th Battalion Virginia Cavalry, under the immediate command of Captain Elias Walker. Five of the rebel horsemen rode up the farm lane towards George Blessing’s stables. Unbeknownst to them, however, they weren’t going to steal the old man’s horses without a fight. As Blessing later related:

As they rode up, I gave my son two guns and I took six and went in the name of the Lord God of Hosts to meet them, and as they rode up in haste we fired upon them in quick time, one was mortally wounded (he died at Middletown), the other so bad, they rode under the overshoot of the barn where we had a cross-fire on them.  As they were retreating I fired, killing one on the spot and took the other prisoner (1).

Taken aback by the sudden gunfire the Confederates took shelter and soon a full fledged firefight erupted. The elderly Marylander and his son Lewis kept up a steady enough fire to cause the rebels to retreat back down the lane and to their command. Figuring the rebels would return in force George grabbed four loaded guns and took off for a grove of cherry trees. Sure enough a group of nearly twenty rebels approached, along with four of Blessing’s neighbors who had been pressed into service as guides.

As the guides slowly approached Blessing’s position the old man fired a warning shot. This kicked off another fusillade from the Confederate horsemen. Blessing took cover as they unleashed dozens of rounds in his direction. He returned fire as best he could, driving the rebels off for a second time, leaving behind their dead and wounded. This time the rebels vowed to bring a battery back and shell the Unionist into submission.

Blessing waited and reloaded, anticipating their return. Fortunately for him the next visitors to ride up the farm lane were friendly. Lt. Colonel George Vernon was shadowing Early’s army with a force of 65 men from Cole’s 1st PHB Cavalry, capturing rebel stragglers and harassing the Confederate supply lines. When Vernon’s troopers arrived in Middletown they heard of Blessing’s standoff with the would-be horse thieves and he immediately set off to assist the old man. Newcomer was part of this command and relates what happened next:

On our arrival in the neighborhood of Middletown we were informed by the citizens that an old gentleman, a farmer by the name of George Blessing, living several miles distant, had shot one or more Rebels, and Colonel Vernon started at once with his men for Blessing’s farm. As our advance was proceeding up the lane leading to the farmer’s house they were halted by an old gray-haired man, fully sixty-five years of age, who demanded that they should go back, or he would shoot. The old gentleman was partially concealed behind a large tree, with a rifle in his hand. Colonel Vernon called him by name and informed him we were Cole’s men and had come to protect him. Mr. Blessing gave us a hearty welcome and said he had mistaken us for the Confederates whom he had exchanged shots with a number of times during the day, and had driven off the enemy not an hour before, who threatened to return and hang him and burn his property. To prove his assertion, he led the way up to his barn yard, where lay a dead Rebel and one in the barn, wounded (2).

The dead man who lay in Blessing’s barnyard was Corporal James Stowers of Bland County, Virginia. The blue-clad troopers buried the dead Confederate not far from where he was shot down. In the barn they found 17 year old Corporal William Holt, of Norfolk. Holt had suffered a gunshot fracture in his right arm, and he was sent to Frederick for treatment at the General Hospital. After two weeks of treatment he was sent on to Fort McHenry, then to Point Lookout. The young Corporal was exchanged in October 1864 and doesn’t appear to have taken up arms again (3).

The Maryland cavalrymen remained at Blessing’s farm through the night in order to protect George from any Confederate retribution. The following day they set off towards Frederick, picking up more rebel stragglers along the way. At the same time the story of George Blessing began to spread throughout the surrounding communities. The Frederick Examiner published an account of his firefight on July 20th, which was augmented a week later by Blessing’s own account of the affair. His account appeared the same day in the Hagerstown Herald of Freedom and Torchlight with the following preface:

Before long the story reached as far as Cumberland, Maryland and Bedford, Pennsylvania (4). One resident of Libertytown in Frederick County suggested to the editors of the Examiner that a collection be taken up to provide the hero of “the battle of Highland” with a “medal…to commemorate his noble feats” (5).

Blessing’s celebrity reached its peak in 1866, with the publication of Chincapin Charlie, a novel of life in Frederick County that recounted the “Battle of Highland” in high prose. That Blessing’s story was included in the novel was no wonder, considering it was written by George’s niece, Nellie Blessing Eyster. The Frederick Examiner claimed the novel “is very readable and is recommended” (6). If you’re interested in finding out for yourself you can easily find a copy of Chincapin Charlie available for free on Google Books.

Despite the initial media coverage the story of George Blessing’s shootout never captured the headlines the way John Burns had the year before. Gettysburg dominated (and still somewhat dominates) the coverage of the war’s eastern theater, and Burns’s legend piggybacked onto that epic story. Blessing, on the other hand, remained a local story, and was largely forgotten outside of the immediate community. The Hero of Highland doesn’t have any monuments to commemorate his bravery. His story is a largely forgotten footnote of the 1864 campaign, and his only monument is the simple tombstone that marks his grave at the Saint Johns Lutheran Church Cemetery in Ellerton, Maryland. 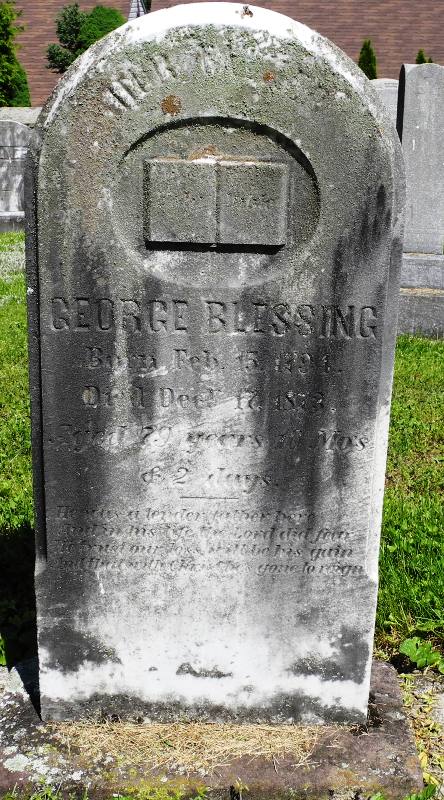 2 Newcomer, C. Armour Cole’s Cavalry or Three Years in the Saddle in the Shenandoah Valley. p 132