We’re going to return from last weekend’s field trip to introduce the fourth and final component of the Potomac Home Brigade – the 1st PHB Cavalry, more commonly referred to as Cole’s Maryland Cavalry. 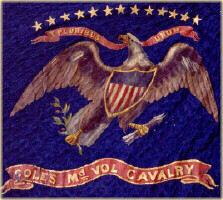 When the call went out to form the Potomac Home Brigade in the spring of 1861 there was no mention of a cavalry component. It quickly became apparent, however, that cavalry would prove useful for the exact services that the brigade was being raised for – scouting, patrolling river crossings, and anti-guerrilla operations. Four companies of cavalry were raised that summer and fall for service in the Home Brigade. Companies A, C, and D were raised in Frederick, while Company B was raised in Cumberland (1). These four companies would begin the war serving separately on detached service, typically supporting the Home Brigade’s Infantry regiments in patrolling the Potomac.

Company A, under the command of Captain Henry Cole (from whom the entire organization would eventually take its name), was primarily made up of Frederick County men. The company was mustered in on August 10, 1861 and took the nickname “Cole’s Rangers”(2). Cole, aged 29 at the start of the war, was a native of Frederick. 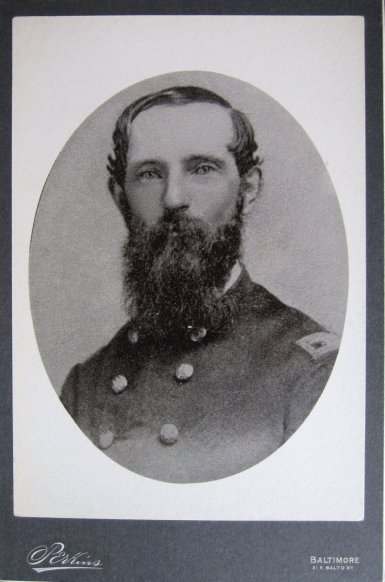 Captain Henry A. Cole (US Army Heritage and Education Center)

Company B, made up primarily of Allegany and Washington County men, was placed under the command of 35 year old William Fiery. You may recall a few posts back when we were introduced to William’s brother, Lewis. Like Lewis, William was a native of Clear Spring, in western Washington County. William was a graduate of the medical school at the University of Pennsylvania and a successful gold miner in California. Around 1853 he returned home to Clear Spring to practice medicine, and it was there that he raised his company in 1861 (3). Upon completion the company rode to Frederick to be mustered in (4).

Company C was raised primarily in the village of Emmitsburg, nestled between Catoctin Mountain and the Mason-Dixon Line in northern Frederick County. A number of volunteers would flock to the company from Pennsylvania, mostly from Gettysburg, earning the company the nickname “Keystone Rangers.” Command of Company C was initially given to John Horner, a 59 year old farmer from Adams County, Pennsylvania.

Although mustered in Frederick, Company D contained a large number of men who enlisted in Baltimore, Allegany, and Howard Counties. Captain Pierce Curll, a Pennsylvania born farmer living in Howard County, would lead the company.

The first four companies would operate independently of one another until the summer of 1862. During this time Company B would operate primarily in West Virginia, while the remaining companies patrolled both banks of the Potomac between Hancock and Harpers Ferry. The four companies would be consolidated into a battalion in August, 1862. Captain Cole was promoted to overall command of the battalion with the rank of Major; command of Company A passed to George Vernon. Cole’s Cavalry proved so useful to Federal commanders during the campaigns of 1862 and 1863 that the organization was further expanded in February 1864 (5). Eight additional companies were created, raising the battalion to full regimental strength.

As with our infantry regiments, lets take a look at the composition of Cole’s Cavalry. Over the course of the war at least 1,616 officers and men served with Cole’s Cavalry. The nativity of the vast majority (1,607 men) could be determined through military or census records. 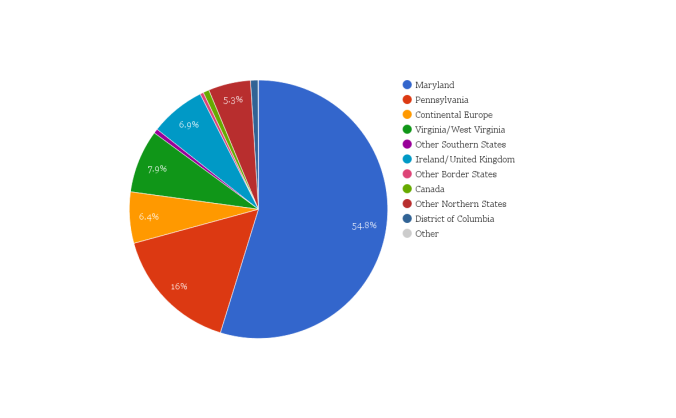 Like the Home Brigade’s Infantry regiments, Cole’s was comprised primarily of Maryland natives, with large numbers of Pennsylvanians, Virginians and West Virginians, and Europeans. The detailed breakdown is below.

Maryland was (unsurprisingly) most strongly represented by the three western Maryland Counties and Baltimore, with a smattering of recruits from the eastern and southern parts of the state. Similarly the majority of the Virginians and West Virginians came from the upper Potomac counties – Loudoun, Jefferson, Berkeley, and Hampshire. The Pennsylvanians largely hailed from Adams and Franklin Counties, just across the Mason-Dixon Line from Frederick and Washington Counties. German and Irish immigrants made up the vast majority of the immigrants in the ranks.

Cole’s Cavalry rendered valuable service through the end of the war, and it was estimated that they covered over 7,000 miles criss-crossing the Potomac region. Their experience was best summed up in a post-war history:

Their thorough knowledge of the topography of the country, which became, to a great
extent, the seat of the war in Western Maryland, Pennsylvania and Virginia, rendered
their services to the Union cause invaluable. During the four long years of war from
1861 to 1865, they were almost constantly in the saddle, and from Gettysburg, in Pennsylvania, to Lynchburg, on the James, in Virginia, they scouted and fought with untiring
zeal (6).

This post will be the last of the regimental introductions, so moving forward we’ll look into the people and places related to the Home Brigade in much more detail. Thanks for hanging in here so far!